A Dutch television maker and an IT expert from New Zealand, running one of the largest peony nurseries in the southern hemisphere. Sounds like a fairy tale? Aunt Rosie Peonies is a modern fairytale come true! 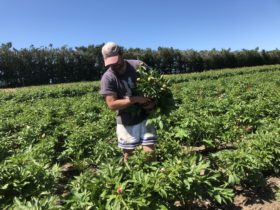 Andrew Scales is a real kiwi: he grows up in New Zealand, where his parents run a successful peony nursery. He moves to the Netherlands to pursue a career in IT, and there he meets Barbera, a television maker with organizational talents. The couple shares so much ambition and energy, the Netherlands start to feel small. They move back to New Zealand together. Admittedly, breeding peonies is something different than solving IT challenges or making television programmes, but for Andrew and Barbera it’s – more than anything – a thrilling adventure.

Aunt Rosie is a modest name for an ambitious company, with multiple nurseries. Each year around 600.000 flowers are grown on 7 hectares, with more fields being added every year. The fields of Aunt Rosie are located in the town of Sheffield, in the south of New Zealand. Mountains shelter the flowers from the rough weather conditions on the coast. The light intensity and high altitudes mean Aunt Rosie’s peonies are the biggest of the bunch. 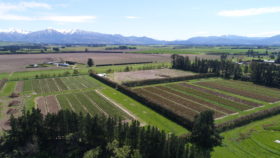 Growing fast
In order to steer Aunt Rosie’s fast growth in the right direction, considerable investments are being made by Andrew and Barbera. The peonies on the nursery have plenty of room to develop, and state-of-the-art agricultural equipmen help provide the flowers with all necessary food and bio-chemicals. Auntie Rosie ensures biodiversity by working organically whenever possible.

A true gem
Harvesting is done completely by hand, with a little help from backpackers who want to roll up their sleeves in the sunny valleys around Sheffield. They get to work in a serene atmosphere, surrounded by thousands of breathtakingly beautiful peonies. Who could say no to that? “A high-tech nursery with a hippie culture”, Andrew and Barbera call Auntie Rosie. We call them a true gem and a wonderful addition to My Peony Society. 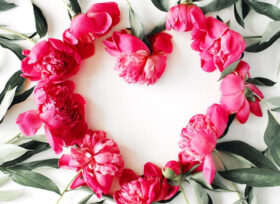 Peonies for Valentine's Day
All stories