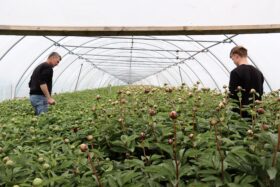 Nursery Veldman Burger is located at the tip of North Holland, all the way in ‘t Zand. It appears a deserted area, but Peter, Susan and their children Floor, Jur and Stijn have made it home. They have created a wonderful nursery, where they grow fantastic peonies.

From bulbs to peonies

Peter always worked in bulb cultivation, just like Susan. When a friend’s father quit his peony business, they decided to take the plunge. They took over the nursery from Arie and in 2000 they bought their first peonies, Dorien and Gardenia. No success, because those were far too difficult species. Now they are focusing on the more exclusive strains, achieving fantastic results.

In 2004 they bought their own land and the Veldman Burger nursery moved to the beautiful location in ‘t Zand. There the company flourished and they learned the trade from peony expert Arie. Last year they bought 10 new varieties, and invested in ways to start early in the season, because: “Mother’s Day has to have peonies!” Well, it worked! There are peonies from early May to early June. 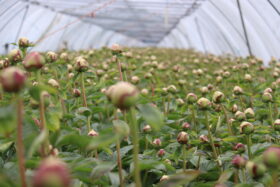 The nursery covers about 3 hectares. Every year about 100 thousand stems are cut, by hand and processed by the family itself, and that is surely a major achievement. There is no storage, everything coming off the fields has to be shipped the same day. Challenging, but super fresh. The most important thing for the family is to deliver uniform top quality, and in that way rank among the very best.

Peter and Susan want to plant new varieties every year and increase the supply. Plenty of room, they are the only ones in ‘t Zand with peonies. Jur wants to take over the family business in the future, when he finishes studying. Then, who knows, the quality of peonies from ‘t Zand can be even higher still!