Honey Gold is a bit odd-looking: she has white flowers with yellow hearts. This 'fried egg' with its cheerful personality fits perfectly into summery bouquets. 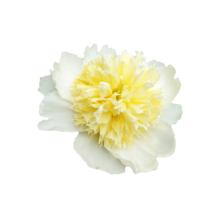 Estimated availability levels per week, based on last year’s data. Make sure you get the highest quality peonies and place your order well in advance. Download the Availability Calendar (PDF).

Honey Gold is a single-flowered, white peony. The bud is white and modest, but once it starts blooming, it undergoes a identity change. The big, yellow and festive heart looks cheerful at its peak. No wonder the flower often gets compared with a fried egg.

Honey Gold was created by Klehm. He introduced her in 1970. The flowers are white in the bud and have a bomb shaped, yellow center while in bloom. Besides this peony, Klehm has shaped Colonel Owen Cousins.

Because of her light-hearted and open character, Honey Gold is not a dramatic peony. She fits better into summery bouquets: she sets the tone, but stays in the background. That’s why she matches other kinds of flowers flawlessly.