John Weverink is a peony lover in heart and soul that turned his hobby into a business. Driven by his passion, he has developed Kwekerij De Weverink in Andijk into a great company that delivers an even greater product!

The peonies of De Weverink are cultivated on five hectares of land in what one might call peony paradise, Andijk in the region of West Friesland. Due to its northerly location, peonies that are grown here bloom relatively late. De Weverink employs greenhouses though, to make earlier delivery of peonies a possibility.

The assortment consists of Coral Charm, Coral Sunset, Dr. Alexander Fleming, Angel Cheeks, Bridal Shower, Gardenia, Command Performance, Red Sarah Bernhardt, Sarah Bernhardt, Peter Brandt, Bowl of Cream and Monsieur Jules Elie and is being expanded each year. The peonies are cultivated both in and outside of greenhouses. According to John, the challenge is to be completely done with the cultivation in greenhouses when the peonies in the fields are about to start growing. Because John cultivates both early season as well as late season peonies, De Weverink can deliver a very wide range of varieties. 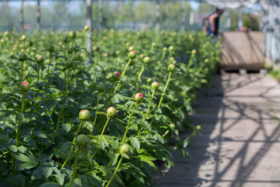 Every year, peony harvesting is being done by a set group of professionals. John knows exactly when to cut his peonies; at peak size, just before they are about to bloom. De Weverink distinguishes itself with these large, heavy and thick-stemmed peonies that are guaranteed to open. 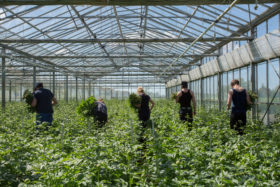 John is an expert and his nursery is active all year round. In spring, De Weverink is focussed on delivering a beautiful product. In fall, John spends his time propagating his peonies.

To sum up, John Wevering is a fantastic grower, dedicated to his craft. We are delighted he has joined My Peony Society, because we believe our shared passion will benefit the industry immensely. 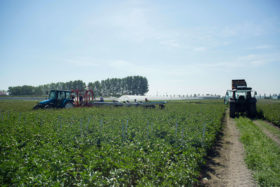