The epic and extravagant history of peonies 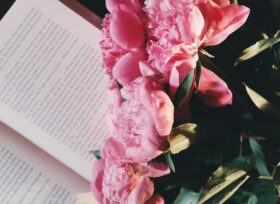 Throughout history, peonies inspired epic deeds and extravagant tales. Journey with us from ancient Greece to imperial China, and discover the storied past of our favourite fashion-forward flowers.

According to ancient Greek mythology, a divine drama inspired the name of the peony. Like so many stories, this one begins with war. Herakles, the greatest of great Greek heroes, and Pluto, the god of the underworld, find themselves on the opposing sides. During a spectacular battle, Herakles manages to wound Pluto with an arrow to the shoulder. Pretty epic, even for Herakles.

Not being used to being wounded, the god of the underworld retires to Mount Olympus. When he can’t find the god of medicine, Asklepios, he asks one of his students to help him. This happens to be the talented god Paean. He heals the dishevelled deity by sheer talent and a new kind of medicine: a beautiful flower growing on Mount Olympus. Paean’s career as a doctor-to-the-divine is off to a great start! But, alas, there’s one problem: his teacher Asklepios is deadly jealous…

In an unexpected – but storywise very thrilling – twist Asklepios decides to murder his student to prevent further embarrassment. Zeus, finding the body of Paean, decides to honour the ambitious student by transforming him into the beautiful flower that saved Pluto’s life. And that’s why these flowers are now called “Paeonia”. We’re not sure what happened to Asklepios, but let’s all agree he should probably stop practising medicine.

Flowers for the empress

In another part of the world, a different story about the peony and its unpredictable character is being told. This one takes place during the Tang dynasty, in ancient China.

In the imperial flower gardens of Xiyuan, Empress Wu is having a ceremonial cup of tea with princess Tai Ping. On this cold winter’s day, there’s a clear, sweet fragrance of jasmine in the air. The queen suddenly is overcome with melancholy. She looks for signs of an early spring, but only jasmine blossoms, all other flowers are still hidden under a layer of snow.

Ever the practical woman, Empress Wu decides to compose a poem for the Flower Goddess. In it, she rhymes: “Let it be spring tomorrow, don’t wait another day. Let every flower bloom tonight, as if it was already May!” While opinions differ on the literary merit of her poem, everyone agrees empress Wu often gets what she wants. So the Flower Goddess agrees and makes every flower blossom in winter. The next day, all the flowers are blooming except for one: the stubborn peony. Wu is furious and she banishes the flower to Luoyang. Once the peony arrives in Luoyang, it surprises everyone with its beauty.

The only flower that can’t be rushed? Obviously, that’s the extravagant peony. There’s no way to get it to bloom outside the season, not even when you’re an empress or a Goddess. Up until this day peonies follow their own course. Maybe, because the peony is so extremely beautiful, it just gets away with more. Who knows?