'A double white bombshell': that is Bridal Gown in a nutshell. The flowers are completely filled, bright white and fragrant. This peony was designed as a wedding flower. It is easy to see why: the flowers are pure, delicate and lovely. The flowers are suitable for a garden or the open field. For example as decoration for a romantic spring wedding. 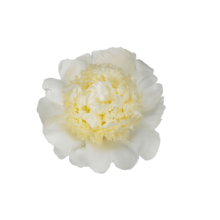 Estimated availability levels per week, based on last year’s data. Make sure you get the highest quality peonies and place your order well in advance. Download the Availability Calendar (PDF).

For a long time, it was thought that this flower would become the competitor for Duchesse de Nemours, but that struggle seems to have been lost. Nevertheless, this peony has a powerful, exuberant core and an elegant appearance.

Bridal Gown first blossomed in 1957 and registered in 1981 by Klehm. Klehm has registered dozens of peonies, including Carl G. Klehm that’s named after him. This peony is a seedling of another well-known white; Charles White.

Vanilla Schnapps Cream-coloured petals, lovely pink heart
Angel Cheeks Angel Cheeks, a peony to remember
Avalanche Fairytale flower with violent heart
Pastelegance Never a dull moment
Elsa Sass Unforgettable
Jacorma Pink as chewing gum
Prairie Moon
Red Grace Packed full of petals
Blush Queen Pale, pink peony with the ultimate summer vibe
Louis van Houtte Surprising colour
Athena We love it!
We use cookies to ensure that we give you the best experience on our website. If you continue to use this site we will assume that you are happy with it.Ok