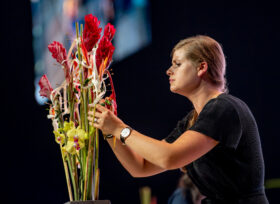 Peonies were an essential element in the floral arrangement with which Hanneke Frankema competed in the European Floristry Championship in 2022. “I make a lot of effort to stand out with flowers.” And it was worth it, because Hanneke won the European Championship – the first Dutch winner in 38 years!

How was the run-up to the European Championship; were you confronted with any surprises?

“Really it started as soon as I became Dutch champion (in 2018). Then you know that you can compete in the European Championship, but Covid messed things up. The uncertainty was annoying: is it going ahead or not? When should I start preparing? That lasted three years. I was worried that I would lose the soul – the feeling from my ideas. That’s why I tested it over and over again, but luckily the feeling was still right after all that time!” 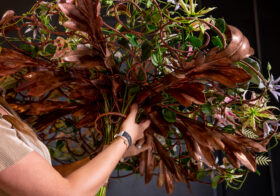 Can you tell us something about the pieces you created?

“They reflect my style: I work a lot with iron and copper frames in collaboration with an artist. I start by drawing, and I allow my ideas free rein within the confines of the assignment. I love natural rounded lines and shapes that merge into one another beautifully, such as Art Nouveau. I make a lot of effort to stand out with flowers. The chandelier that I made is very special to me. I incorporated a lot of unusual flowers in that, like long Gloriosa that I commissioned from the grower specially, a lot of peonies and nerines.” 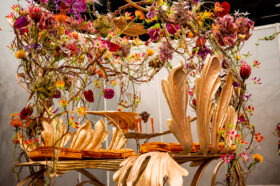 What went through your head when you heard that you were one of the top six candidates and were going through to the final?

“I was pleasantly surprised when my name was read out. The piece that we had to create as a surprise challenge was totally not my style: square shapes and straight flowers with thick stems. Luckily I quickly came up with the idea of making a fan. I was very happy with the end result, and the jury were impressed.” 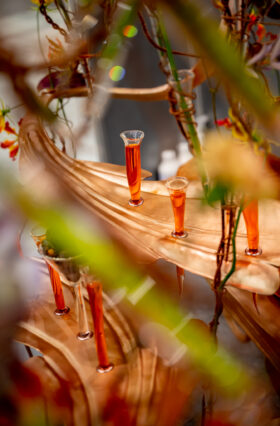 And now? Are there new challenges ahead?

“I was soon inundated with commissions, but first I took some time for my family. A new building is currently being built next to my house where I will be giving masterclasses, both national and international. There’s a lot of demand for that. People are keen to learn techniques, and I really enjoy doing it!” 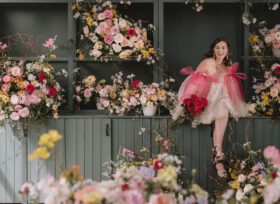 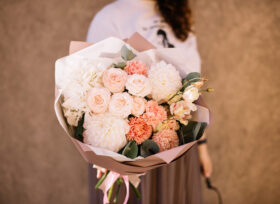 Positive vibes: peonies make you happy!
All stories
We use cookies to ensure that we give you the best experience on our website. If you continue to use this site we will assume that you are happy with it.Ok