Deep in the province of Zeeland, bordering a dyke where fresh and saltwater meet, is where you’ll find peony nursery Arjen Knulst. His father founded the nursery and started out with paeonia officinalis, commonly known as garden peony. Today, his son Arjen runs the company. Their assortment consists almost entirely of Sarah Bernhardt with a couple splashes of Flame, and will see an exciting expansion with early peony varieties the next few years. They ship over a million stems a year. 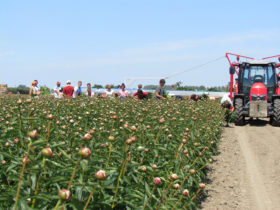 The peonies are cultivated on two different fields. The biggest field is over 5 hectares and is filled with Sarah Bernhardts. Anyone climbing the dyke to get a good view of this wonderful spectacle will be rewarded with a memory for a lifetime. The Sarah Bernhardts from Arjen Knulst are among the thickest one available on the market, no doubt the result of the heavy soil, the original cuttings and the fact that Zeeland is the sunniest province of the Netherlands

Anything for the peony

The location of the nursery also leads to some disadvantages: brackish water, a real headache for Arjen year after year. Sprinklers are not an option because the brackish water is in the ground itself this close to the dyke. This means the peonies have to depend on rain. If none falls, Arjen makes use of water tanks. No effort is spared to get those peonies as beautiful and strong as possible!

Revenue is invested back in the company by Arjen and the future’s always on his mind. After a massive harvest of over one million Sarah Berhardts in a week, Arjen purchased a Quality Buncher, a bunching machine that can sort large quantities of flowers quickly and carefully. The flowers can be bunched in threes, fours or fives and be easily defoliated, which is helpful for air freight. Peony nursery Arjen Knulst is ready for the future.

Arjan makes sure that every peony that he ships is perfect. He won’t settle for less, and we at My Peony Society couldn’t agree more.